It begins! Yes it’s true – Jeff and Jaynie are embarking on a 6+ month, 20+ country odyssey starting in Vietnam and ending in Ireland. This trip has been nearly 10 years in the making, and we’re very excited to get going. There are countless people to thank for advice and support that made all this happen. We’ll do our best to post updates from our travels so all of you can see the joys (and misery, which are frankly more interesting) of our odyssey.

A little backstory behind our trip. In 2007 we took our first big vacation together- Egypt! It was such a great adventure, and we immediately began scheming for another adventure. The next year, we planned an expedition to Vietnam. Well, planned is not really the right word – we showed up in Vietnam and somehow made our way from Ho Chi Minh City (aka Saigon) to Hanoi. This experience in ad hoc travel through such a different culture planted the seeds of our wanderlust, and it’s no coincidence that we begin our current journey in Saigon.

Since that first trip to Vietnam in 2008, we’ve been planning to do a stint of long-term travel. Somewhere along the way we stumbled across the UK to OZ overland journey. This trip involves taking overland travel (mostly by rugged bus) from London to Sydney, and frankly we thought it was the coolest thing we’d ever seen. The original route of this trip had you cross Syria into Jordan and then Iran(!), and it always stuck with both of us that a trip like that would be amazing to do someday. 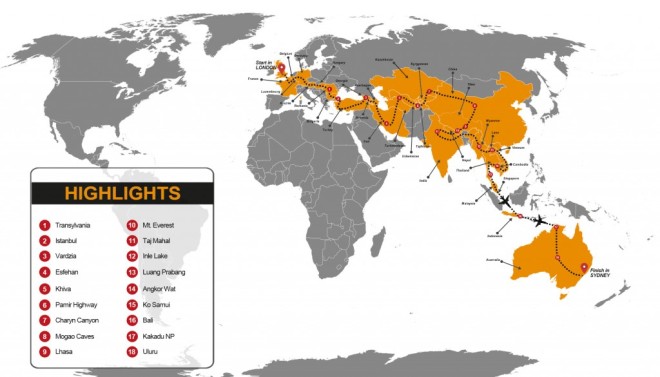 Over the past 10 years we tried a few times to make this big trip happen, but the timing just never quite worked. Between careers (Jeff), grad school (Jaynie- gah!), moving cross-country twice, and other life commitments it was very difficult to carve out the time and money to make the trip happen. After spending 4 years living in San Francisco, we knew that the stars were finally aligned to make this the right time. Plus we’re getting old and cranky so it’s kind of now or never. So here we are, bags packed and ready to go! Without further adieu here is the mostly-finalized itinerary. 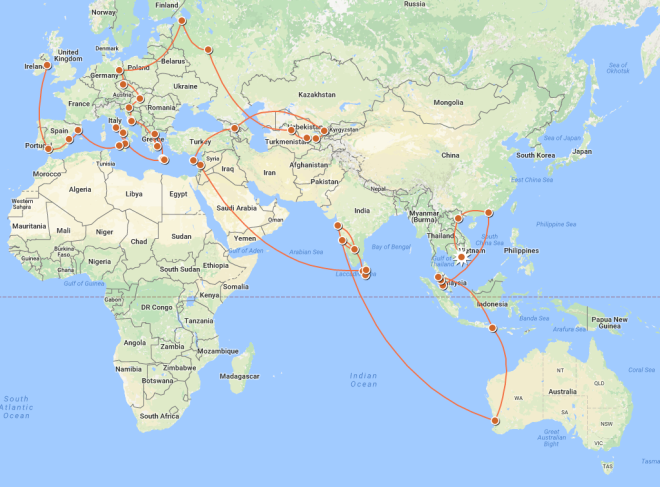 Country Itinerary (as of Feb 23)

As you can see, our itinerary definitely bears resemblance to that original UK to OZ itinerary, but in reverse and with much more time in Europe and a little less time in Asia. Also, we have far less (i.e. no) camping involved which makes both of us much happier (let’s face it, we’re fancy kids). We will be spending the bulk of the summer in southern Europe (again with the fanciness), which is peak-high season for tourism so we’ve had plan out much of the itinerary in advance. We’ve spent countless hours pouring over the Excel spreadsheet of our trip, tweaking our itinerary, researching, revising, and Trump-proofing our trip as much possible.

We’ll start the trip in Saigon on February 27, 2017 and we’re tentatively ending the trip in Dublin end of September 2017. We’re leaving the end of our trip flexible, so we can see how bedraggled we’re feeling by the time we roll into Dublin.

With bags packed we’re all set and ready to go!

Next stop: Vietnam in a few  days!