Jeff arrives in Vietnam!!! And the trip begins.

We split our time in Vietnam between Ho Chi Minh City (HCMC to the lazy) and Hanoi – about 4 days in each. Our time in HCMC was fairly uneventful compared to trip past (i.e. I wasn’t robbed by punk kids on a moto), and we mostly revisited the sites of our previous adventures.

For our first meal of the trip, we headed straight to Mumtaz- an Indian restaurant that over the years has provided us with much respite from HCMC’s grim backpacker fare. We were happy to see that although things had changed a bit, the longstanding menu typos remained and the food was tasty. That evening, we kicked off the trip right with some tepid Tiger Beers in a filthy alleyway with primo people watching. The next morning, we made our first visit to a Starbucks in the Socialist Republic of Vietnam. On our first trip 10 years ago – Starbies definitely wasn’t happening. See the fun below.

Jeff arrives and the trip begins!!!

Delicious Indian food at Mumtaz. Such a good first meal!

Warm Tiger Beer in an alley. Vietnam is great.

A frappacino in HCMC? Wha??? 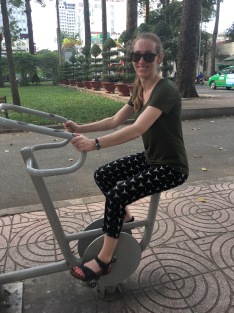 Exercising in the park. I wish you could see the 1,000 grannies behind me.

This is the spot where I first had coconut water 10 years ago. A love affair began….

After a healthy dose of nostalgia, we headed north to Hanoi. I couldn’t talk Jeff into doing 24 hours on a bus again (such a diva), so we flew. Hanoi was a treat – I’d forgotten how different it is from south Vietnam. There are so many intact colonial buildings, and the whole vibe is less chaotic and stressful. We spend a lovely day exploring museums with the delightful Andrea and Michael, and ate tasty bun cha – which, we were told repeatedly, was a favorite of Barak Obama.

On our last day in Hanoi we visited the mausoleum of Ho Chi Minh. Despite his final wishes to be cremated, the Vietnamese socialist party decided to preserve Uncle Ho’s body Lenin-style, and display his ‘visage’ to the adoring public in a meat-locker like mausoleum. In order to actually get inside the mausoleum – which was, you know, why we were there – we had to go through the whole queuing process twice. The first time through the line we were not issued a ticket, which costs no money and seems to require you just ask for it. After a security guards demanded it, we queued again for 20 minutes to get said ticket. At the end of the line, I asked for my ticket. The guard yelled, “There is no ticket!”. I just stood there for a full minute staring at him until someone waved us into a line that was headed inside the building, so whatever.

Most of the other people going inside were Vietnamese and they looked like they might be country folk. It really was fascinating to see the reverence with which people visit the mausoleum. Ho Chi Minh is still very much regarded as a champion of the Vietnamese people by much of the north, and you realize how critical a strong figure like Minh was during the American War.

The streets of Hanoi 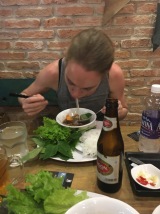 Bun cha- not an easy dish to eat

At the Temple of Literature in Hanoi, a successful PhD candidate was commemorated with a turtle stelae. I hate those turtles…. 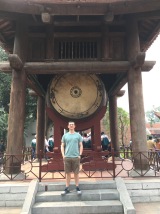 Traffic in Hanoi- not as bad as HCMC! 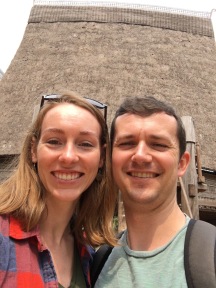 Here we are in front of a traditional longhouse. Mostly this is the only photo of the day where we’re not realllly sweaty.

Here’s the mausoleum of Ho Chi Mihn. Lenin would be proud.

And speaking of Viet Cong…. after a solemn morning at the mausoleum we hit up a Viet Cong themed coffee shop called CỘNG CÀ PHÊ (sidebar: I found my new favorite drink- coconut coffee!!!!). The CỘNG CÀ PHÊ is a post-ironic hipster reimagining of a Viet Cong jungle camp. From the $50 knock-off TOMS (called CONGS, of course) to the pseudo-jungle latrine to the Soviet star in the latte froth, the whole thing is hysterical. And weirdly, really really well done. I’m pretty sure that this gross commercialism isn’t quite what Uncle Ho had in mind as he lead the communist resistance movement, but frankly the existence of CỘNG CÀ PHÊ actually encapsulates the real victory of the Vietnamese people. Bad things have happened, we’re over it, now let’s make lots of money off of people less crafty than us.