In addition to the fact that experiencing Ogoh-ogoh day and Nyepi was very cool, the town of Pemuteran itself was really a highlight. In fact, I’d say it’s my favorite place on the trip thus far. It’s a small town nestled between the sea and the mountains in north western Bali, and it’s currently at the perfect level of tourist development. There are plenty of amenities (ATMs, restaurants, taxis) but it’s not overrun with whiteys like me. I chalk this up to the fact that it’s a 4-hour drive from the airport, so partying Aussies don’t make the trek.

We stayed at the Kuda Laut resort, which was fabulously nice. The resort has just three bungalows and they’re super well designed. The owners are two Germans called Catherin and Marcel, and their very German attention to detail makes this place special (homemade dragon fruit jam anyone?). We loved it.

In addition to being a fab resort, Kuda Laut is a diving school. Uncharacteristically, we took a ‘when in Rome’ approach to this adventure, and took a diving lesson from Catherin. After a one-day lesson, we were deemed “skilled” enough to head out into the reef around nearby Mengagan island. It was TERRIFYING, but I’m glad I tried it. Even Jeff admitted that diving is ‘a little scary’, and maybe he won’t do it again…. But look at what we saw!!!! 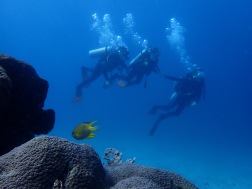 Our dive begins! I’m clutching Catherin’s hand like no tomorrow.

And a Nemo in a cozy coral. There were so many Nemos!!!!

Some funky corals were growing on this anchor thing.

My peace sign is a terrified cry for help but Jeff looks to be having fun. 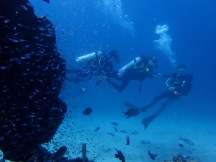 Look at all the fishies!

After the glory and isolation that was Pemuteran, we drove two hours south to the American-soaked theme park that is Ubud. In case you’re unaware, Ubud was the Balinese home base for the heroine of E-P-L. The whole town is brimming with middle-aged American women channeling their inner Julia Roberts whilst splurging on $200/ day yoga retreats and gluten free goji berry energy balls at a crunchy grocery store called Bali Buddha. Okay fine, I loved Bali Buddha but it was ridiculous.

Our first day in Ubud Jeff and I stumbled into a vegan restaurant called the Ātman Cafe. (side bar: ‘Ātman’ refers to the Buddhist concept of the metaphysical self. Not sure of the details here but it seems to involve a good amount of coconut milk.) This café was great because we got to eat non-Balinese food for a change and eavesdrop on possibly the most ridiculous posse of Americans ever. They were on a lunch break from an ecstatic dance workshop. Need I say more?

But I will say more. One posse member was a middle-aged dude wearing avocado patterned socks with Birkenstocks and literally (I’m not joking) snapping along to Balinese chants playing on his iPhone. Another was a rail thin, large breasted yoga bimbo (yogimbo?) who was the leader of the ecstatic dance workshop. All of the men had pony-tails and other than the birkis, none of them wore shoes. They sat on the floor cross-legged (very Beatles in India-like) and tried desperately to impress each other with their enlightenment. Man, it was rough to see.

Saraswati Temple in Ubud. Jeff did a nice job of cropping out the Starbucks just behind us.

The temple was actually pretty lovely.

The view from our AirBnb. It was pretty fab.

More rice paddies from our AirBnb.

I got a massage here. Super, super fun.

In spite of all of my judgments, however, we actually had a very nice time in Ubud. The food was good and it was an easy place to spend some time. Ubud was our last stop in Bali, so next up- the land down under!!!!