And now we have arrived to the Indian portion of the adventure. I have to be honest, Jeff and I were dreading this part of the trip. The heat, the chaos, the crush of humanity – India is an intimidating place. Long-time travelers love to regale you with their stories of the place that broke them, and I feel like for many travelers India is that place. With this context in the back of our minds we landed in Mumbai ready to have our spirits broken. My cousin Matt was meeting us for this leg of the journey, so at least we’d get to take him down with us.

India started out on a good note, however, and we were lucky enough to stay with the phenomenal family of my friend Jahnvi (remember her from WA?). The Purwars live in Thane, a ‘small’ city of 1.8 million just outside of Mumbai. Thane turned out to be a wonderful ‘baby-step’ gateway for visiting Mumbai and staying with the Purwars was an absolute treat. Mr. Purwar is a master chai walla, and Mrs. Purwar showed me how to make aloo parathas. Could we ask for more?

And with Mrs. Purwar- the best mommy away from home we could have asked for.

Matt and I did a zumba class with Jyotika (right). It was…. sweaty.

It was mango season, and we discovered that Alphonso mangos are the gold star. Eventually we were traveling with our own stash of Alphonsos like proper Indians.

After settling in to our new home in Thane we ventured the 30 km south to Mumbai proper. I expected to be accosted by homeless beggar children with no arms at every corner, but to be honest the city felt quite middle class and – dare I way it – tame. We had a lovely time exploring the colonial area of Colaba, and the colonial British buildings were fantastic. 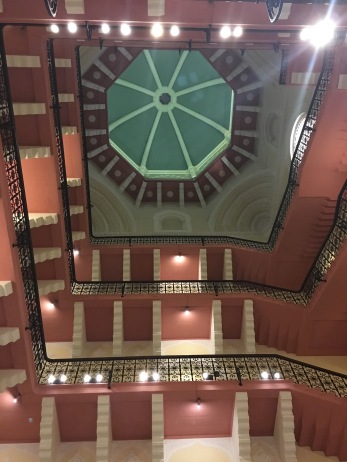 The stairway at the Taj Hotel. 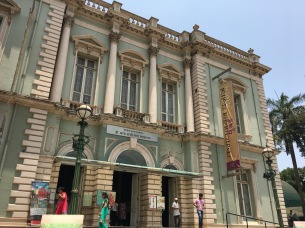 The Dr. Bhau Daji Lad Mumbai City Museum – formerly known as the Victoria and Albert Museum. The museum was in a great mansion built in 1855 and had a fab exhibit on early Indian advertising.

The Keneseth Eliyahoo Synagogue in Colaba. I would have loved to go inside.

A side view of the Taj Hotel.

The Gate of India. It’s pretty cool when you can crop out the 10,000 people there.

Walking around Colaba, I was surprised at the strong presence and visible reminders left from the 2008 terrorist attacks on Mumbai. Security at tourist sites and malls is high, and armed guards are stationed at every building of significance. The Purwars took us to an art exhibit at the Taj Hotel, and it was chilling to see in person the corridors, staircases, and windows I saw as grainy images on CNN during the terrorist rampage. One morning we went to the Leopold Café for brekky, and I turned around to see that the window directly behind still had bullet holes from the attack. The café has kept the damage as a memorial of the attacks, but it’s spooky to drink your tea directly in the spot where someone was shot. 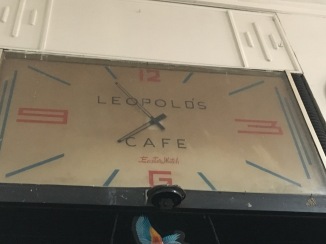 The Leopold Cafe was quite the time capsule.

The front of the Taj Hotel. You can’t really see the security but it was intense.

In addition to exploring Colaba, we did a tour of Dharavi – the largest slum in the world – and Dhobi Ghat – the largest outdoor laundry in the world. Both were fascinating, but the slum tour in particular surprised me. We visited two areas of the slum, an industrial commercial section and a residential section. The industrial area was largely dedicated to recycling plastic, tin, and cardboard, and was filthy and horribly polluted as one would expect. The residential area, on the other had, was amazingly clean and well organized. The homes actually looked pretty comfortable, and I was surprised to learn that many slum dwellers hold legal rights to their homes. This was such a departure from my expectations of a Mumbai slum- I didn’t see a single armless child beggar.

But lest you think our time in Mumbai was totally sanitized, I will leave you with a lowlight from our time in the city: our visit to Victoria Terminus Train Station, now called Chhatrapati Shivaji Terminus. Victoria Terminus is a historic British colonial building and a UNESCO world heritage site. It also happens to be a shit show, exactly what you imagine when you conjure horror stories of India’s unwashed masses. The station is packed with people stretched out on every imaginable surface waiting for their trains, and the still hot air smells of sweat, poop, and stale food. 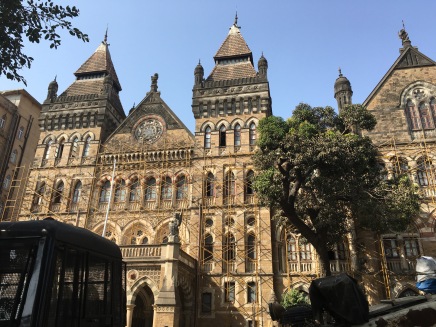 The outside of Victoria Terminus is stunning.

Built in 1887 to commemorate Queen Victoria’s golden jubilee, its a massive structure. 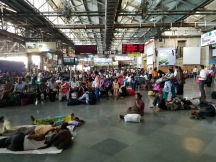 And here’s the inside. I wish you could smell it.

Seeing this juxtaposition of beauty and chaos would have been interesting save for the unfortunate fact that both Matt and I had to tinkle. A pox on our tiny Chandler bladders! Let me just say that I’ve used terrifying toilets before. I once used a floor toilet in Vietnam where live chickens pecked at my bum, so frankly I didn’t think that I could be shocked. The toilets in Victoria Terminus shocked me. I won’t go into too much detail, but I will say that there was an open-air poop trough (being very well used), a jumping rat in a garbage can (they can jump!), and an indecipherable social hierarchy of toilet stall usage. After 5 minutes of dumbly waiting, some nice aunty took pity on me and negotiated a toilet stall for me. I kind of wish she hadn’t since the toilet was terrifying. Matt also had an adventure in the gent’s toilet but I think I win this one… Here were our faces after the fact so you can judge.

Train station toilets aside, we had a surprisingly lovely and easy first stop in India. I have to admit that my preconceived notions travel in India were mostly wrong.

On our last evening with the Purwars, they treated us to a lovely South Maharashtran meal in Thane. After easing into the proverbial ‘hot tub’ of India, Matt, Jeff, and I ready for our next adventures – Bangalore and a south Indian wedding.

One thought on “India Part 1 – Mumbai”