After a week of rural charm we headed to Crete’s southern coast for a week of beach time in the town of Ierapetra. Ierapetra is a sleepy city and our AirBnb host was amazed that three Americans had ventured to her town. “All the way here? From America?” Well it’s not like we swam or anything but point well taken. While the northern Mediterranean side of Crete has a robustly developed tourist infrastructure, southern Crete’s Libyan sea is fairly remote and craggily. We ran into a few Russians, a handful of Italians, and that was pretty much it. There aren’t any big resorts or package deals around and that is precisely the draw. The southern coast is beautifully austere and the slow pace of life feels like a time capsule of Greek island life over the centuries.

Ierapetra’s claim to fame is that Napoleon sought safe harbor here in 1798 on his way to Egypt. The house where he supposedly stayed is the flimsiest tourist site ever and the less said about this the better. Beyond the lameness of Napoleon’s house, Ierapetra is a pleasant and quiet little town with a sleepy waterfront strip (they loved us there), some calm beaches for locals, and very little to do except relax. 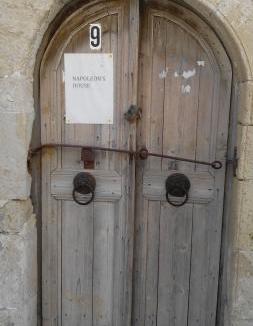 Napoleon stayed here. Once. Over 200 years ago. 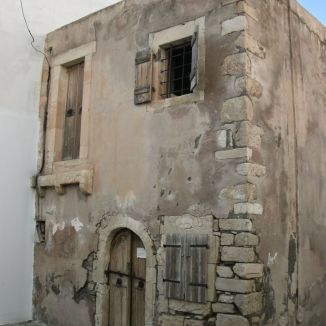 Our Airbnb host was one of a (very) small contingent of Ierapetra-hipsters and she had fabulous recommendations for food and shopping around the southern coast. We made food pilgrimages to several little villages around Ierapetra to eat at tavernas she had recommended and every suggestion was spot on. Our favorites were a seafood place called ‘Schedia’ in Eparchiaki Odos (kitties!!!) and a glorious taverna called ‘Kapilio’ in the tiny village of Monesteraki at the base of the impressive Ha Gorge (they had kitties too!!!). Both places were very cool, very old school, and very, very Cretan. At Kapilio we spent the evening chatting with one of the owners who along with her husband (clearly foodies), had taken over the 50-year old taverna a few years back. They make only a few dishes each night but everything they do is delicious.

I have no idea how we got this photo. This little guy was quite tolerant.

Another restaurant kitty!!! He was slepy. 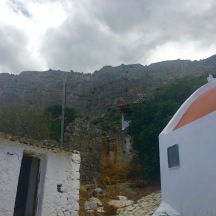 The ‘village’ of Monestiraki. So tiny, so cute.

We visited a handful of nearby beaches around Ierapetra, but far and away our favorite was Myrtos. According to Wikipedia, Myrtos was ‘discovered’ by the hippies in the 70’s, and today is an extremely cute beach town with just the right amount of infrastructure and development. There are about a dozen restaurants and shops, a nicely groomed beach, and a handful of holiday rental apartments. Our favorite beach spot was right outside of a cafe called Ca’Nova, and the cafe provides free sun beds to patrons. The place is owned by an Italian family and the homemade pasta was heaven. Grannie spends her days making raviolis in the sun and generously gave me a lesson on how to maintain ravioli integrity (pinch the seams harder than you’d think, she says).

This is my new hobby I developed in Myrtos.

The view from our bed at Ca’Nova cafe.

We’ve never actually done a holiday that involved so much beach time and I think I finally understand why the Euros are so beach obsessed. Usually gearing up to go to the beach feels like a production but if you do it for multiple days in a row it becomes an easy routine. There is a nice rhythm to setting up a beach camp, lounging with cappuccinos and frappes, swimming occasionally, and basically spending the entire day reading in the shade. I think that all three of us took a liking to it.

Like our rural time in Apostoli, our time on the southern coast was a great way to see a side of quiet Crete. There are no ‘must see’ sights and you need some time to soak in the atmosphere, but it was such a treat for us at this point in the trip. After a lazy week, we bid adieu to my sister Callie and prepared for our expedition to the inner most ring of the tourism inferno – Rome in August.