Hidden picture challenge: Can you find three Barbary apes nestled on the Rock of Gibraltar in the photo above?

Much like the beleaguered Neanderthals, Jeff and I staged our last European hurrah in Gibraltar. How fitting. True, the Neanderthals were pushed to edge of Europe by hostile homo sapiens and we are fleeing the tyranny of the ‘90-day Schengen Visa’, but if you think about it it’s basically the same thing.

We made our way from Algeciras to the Spanish town of La Lí­nea and crossed on foot to Gibraltar (or ‘Gib’, as the Brits absurdly call it). This was the lamest border check-point I’ve seen. No stamps, pat-downs, or vaguely menacing men with guns. Where’s the fun in that? Though the bureaucracy is minimal the logistics of the crossing still manage to be comical. The main road into and out of Gibraltar (Winston Churchill Boulevard, of course) bisects the runway of Gibraltar International Airport. When planes need to land or take off (which happens often), traffic is halted and it’s quite a spectacle. I understand that space is limited but this is absurd. The bus we were on waited for three RyanAir flights. Come on!

The Rock in the distance!

And our bus waiting for the runway to clear. We waited. And waited.

Coming from the land of wine and tapas, the deliberate and aggressive British-ness of Gib is striking: retro red telephone booths, excessive signage cautioning you to ‘mind’ things, and pasty-faced pensioners abound with nary a straight smile in sight. There is even a weather pattern that regularly envelops Gibraltar in fog. You can’t get more UK than that. I have to admit that while Jeff and I hide our heritage behind thousands of dollars of orthodontics and chin jobs, deep down the UK does feel comfortingly familiar. In this vein, we began our time in Gibraltar with cups of milky tea and a hearty full English: beans, a tomato, blood sausage, and fried eggs. 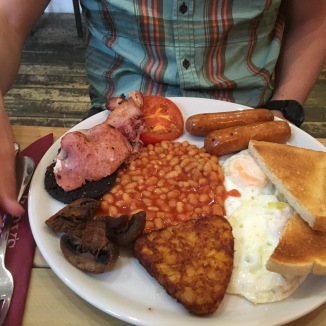 There aren’t an abundance of sites in Gibraltar, but the Rock has had an outsized impact on human history. As I alluded to, Gibraltar was the densest site of Neanderthal settlements in the prehistoric era, and it was likely the last site of Neanderthal habitation before extinction (at the hands of our ancestors). Later, Gibraltar was an important place for the Carthaginian and Roman Empires, for whom it was a holy place and considered to be the one of the two ‘Pillars of Hercules’. The name ‘Gibraltar’ is a corruption of the Arabic phrase Jebel Tariq – or the Mount of Tariq – and is a reference to the Moorish conqueror of Spain (Tariq), who invaded the Iberian Peninsula via Gibraltar. So yeah, lots of things have happened on this rock.

Jeff got some great shots of the Rock of Gibraltar.

This thing is really big.

The British history of Gibraltar began in 1620, and the territory doesn’t seem to have any interest in divesting from the crown. In fact, last year over 99% of the 30,000 Gibraltarians voted to stay in the UK, which that helps to explain the aggressive British-ness of the place. Everyone living there just acts like it’s perfectly normal to have a 2.6 square mile island of UK on the southern edge of Spain. “Spain? What is this place? We’re British.” Okay, fine.

The Rock (and Barbary Apes)

One of the few ‘activities’ in Gibraltar is a cable car to the top of the rock. I sat this one out since it sounded terrifying, but Jeff made the trek up and loved the views. He saw lots of plaques memorializing British naval history (oh, the grand tradition) and saw plenty of monkeys. The little buggers are feisty, and he saw two people get attacked by them. The patrol officer up there said, “Ah, don’t worry. The monkeys are vaccinated.” Oh great, then it’s totally fine if they bloody my arm. 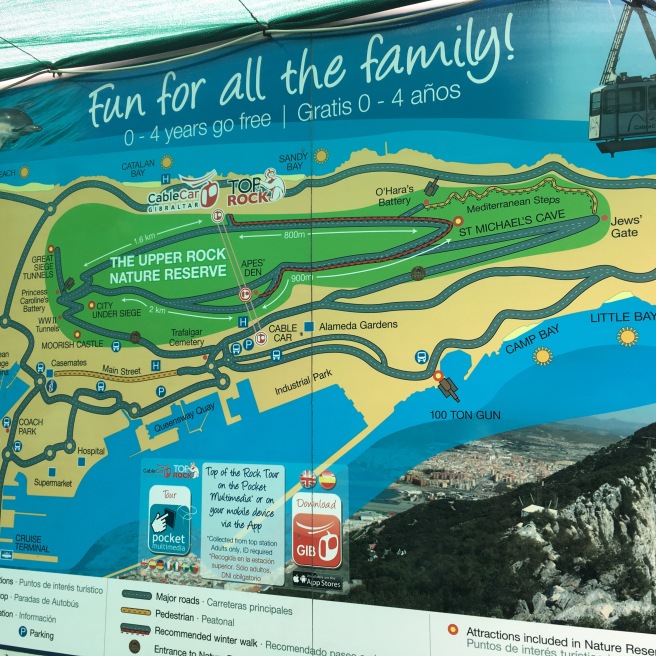 It’s fun for all the family!!! (Except those of us with acrophobia…)

The ride to the top!

Aw, this little guy is striking quite the pose.

This is guy is either in timeout or checking his iPhone. I can’t tell. 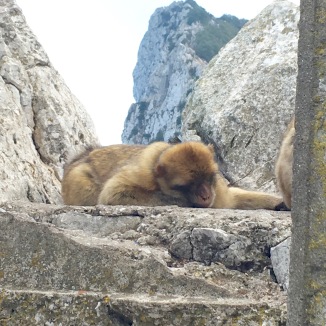 This photo captures it all. Pretty great.

To round out our very British day, we went to Lord Nelson’s Pub for a proper pint. We chatted with a barman from Leeds, and he told us that young Brits go to work in Gib to earn money and have a bit of an adventure. They earn wages in the British pound, enjoy a lower cost of living, and can travel throughout southern Europe cheaply. I can understand that impulse, and it helped to provide some context for how a weird little place like Gib can exist. Young Brits work there, and old Brits retire there. Gibraltar has a pleasantness to it that I didn’t expect, and it was an enjoyable last hurrah in Europe. 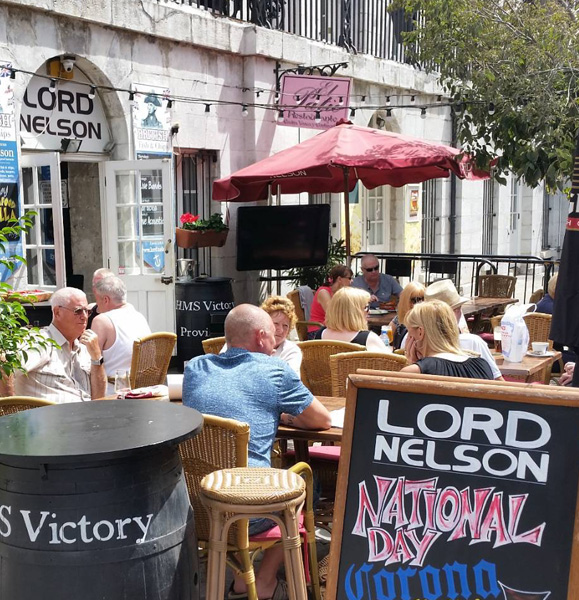 From Gibraltar, we said goodbye to Europe and headed to our fifth continent and our last country: Morocco.