The rest of the world makes jokes about the convicts in Australia, but I was surprised at how much of an ongoing legacy the ‘convict era’ has left on WA. Due to a combination of poor judgment and misguided business ventures, the British crown founded the Swan River Colony (now modern day Perth and Fremantle) in 1829. This was a very bad idea, and for about two decades the colony hung on by a thread, hemorrhaging settlers to death and defection.

During this period, England also had a convict housing crisis on their hands, and was addressing the issue by holding inmates on defunct ships moored off the coast of England. By all accounts was not a great situation. Someone very clever put their head to the Empire’s problems and decided to send a bunch of these convicts to settle WA. The convicts would serve as free labor to build the infrastructure of the floundering Swan River colony, and the England would be free of typhoid-infested boats full of criminals within swimming distance of the homeland. Win-win.

(Please note that I got most of the convict history from a children’s book at the Fremantle Prison gift shop, so it might be worth fact checking.)

Anyway, this is the back-story for how a slew of convicts were shipped off to Perth and Fremantle and trained as craftsmen and builders. When they first arrived, the convicts’ task was to construct themselves a prison, which I have to say had a surprisingly impressive build quality. It had these amazing hardwood floors made of Jarrah wood, which I am now obsessed with and want in my home.

Jeff and I did two different tours of the Freo prison, and it was a major highlight. Both times our guides were dry-humored prison guard types who meticulously explained the right way to arrange a hangman’s noose (directly under the right ear) and how to make alcohol out of toilet water (you don’t want to know)…

The front gates of Fremantle Prison.

The Anglican Church in the prison- basically the only place with windows and light.

This is the hanging room. It was uniquely creepy.

The prison yard. It wasn’t too bad.

A super cozy cell. This photo doesn’t do the Jarrah wood justice.

The main hall of the men’s prison. Notice the lovely ‘suicide net’ to catch jumpers.

Amazingly, the original convict built prison was in use until the early 1990s, when a prison riot involving a several day hostage situation prompted government officials to close the prison. Closing a prison takes time, however, and in Freo Prison’s waning days the resident psychologist decided that it would be good for moral to let the inmates decorate their cells. The result is simultaneously inspiring, sad, and creepy.

A sweet little pice of art.

Someone was longing of the English country side.

This guy did a whole room integration. Pretty cool.

I’m not sure what this was but its spooky.

The well trained slave labor that the convicts provided became an unexpected asset for WA. To this day the build quality of homes, commercial buildings, and municipal buildings in WA is surprisingly good. The convicts may be gone now, but their occupational (and perhaps genetic) descendants live on as skilled blue collar craftsmen called the ‘tradies’. Modern day tradies are well paid and highly employable, and are a fascinating cultural holdover from the convict era.

When we weren’t obsessing over the Freo Prison floors and cute old buildings, we spend some time in Perth exploring the downtown area and the King’s Park botanical garden. The flora in the park was amazing, and we saw funky plants that we’ve never seen before. My new favorites are the eucalyptus macrocarpa and the bottle trees. Super cool. 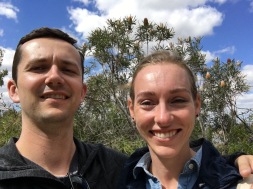 Jeff and I at Kings Park.

The oldest tree in Kings Park, a boab tree.

Part of this cool plant that has to be burnt to complete a germination cycle.

Perth and Fremantle are delightful cities, and we thoroughly enjoyed our week relaxing there. Our next WA adventures took us a little further afield. In reality we basically did the softest nature excursions imaginable, but by my standards we were roughing it in the outback. Yeah, we’re tough.

Next up, Jurian Bay, Rottnest Island, and Margaret River!