I think we’ve been traveling in south east Asia for too long – experiences are beginning to repeat themselves. After a short 1-hour train ride from Galle, we arrived in Mirissa Beach. The town was preparing for a big annual celebration that involves closing all of the shops and restaurants, everyone wearing white, and a bit of chanting. Humm, sound familiar? The Vesākha festival celebrates the birth and enlightenment of Buddah, but many of the trappings felt quite similar to our Hindu New Year Nyepi experience in Bali.

We stayed in a sweet family run guesthouse called the Panorama Guesthouse. The owner’s teenage daughter Vindi was an excellent host, and the family made sure we ate to the point of illness every morning. This turns out to have been a good thing since restaurants were closed and we had to survive on breakfast leftovers. Vindi’s dad Supul was in charge of organizing the Vesākha celebrations at one of the local temples, and the family was kind enough to take us one evening to see the lighting of the thorana. We got rained on, but that was part of the magic. 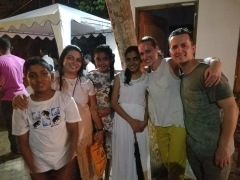 Us with Vindi and fam. We’re soaked from the rain.

A sleeping buddha inside the local temple.

In Sri Lanka Vesākha is held on a full moon, so that’s pretty cool.

The electrically light thorana was lit at a precise time- then it immediately started pouring rain. 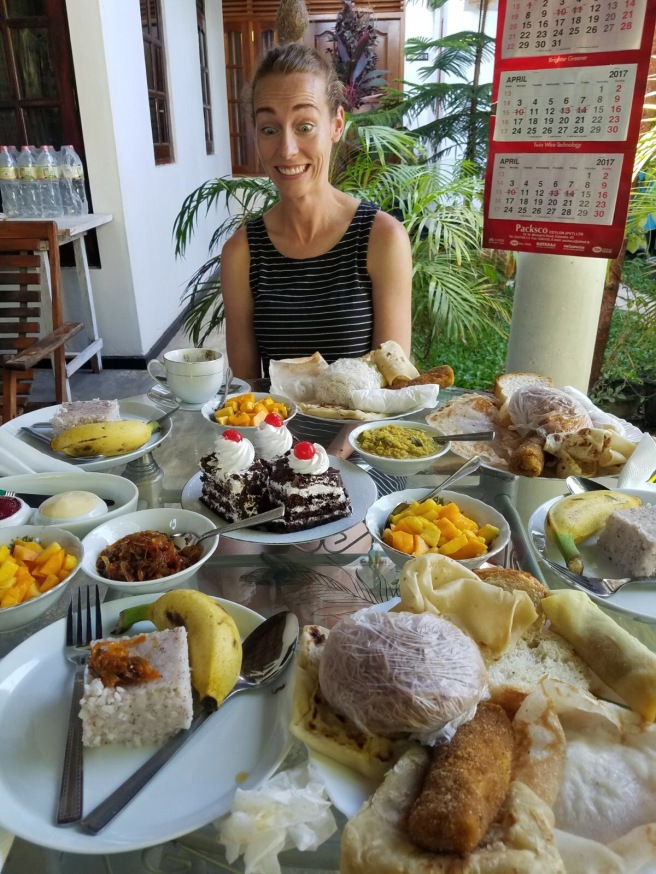 Breakfast at the Panorama Guesthouse. Yep, its a lot of food.

The main thing to do in Mirissa is go to the beach. After wasting our first day in town on the fairly lame Mirissa Beach, we headed to a place Vindi told us about called Secret Beach. Secret Beach can’t be accessed on foot, and our tuk-tuk nearly overturned several times on our descent to the beach. I guess that’s what keeps this beach secret. The ocean near southern Sri Lanka is rough and choppy, but Secret Beach has a natural wave barrier of rocks about 30 feet from the shore. This means you can frolic in the calm safe waters while watching an amazing water show as the huge waves crash over the protective rocks. It’s one of the most interesting beaches I’ve ever seen, and we spend an entire two days just hanging out there.

Jeff and I having a moment.

Jeff managed to stave off sunburn.

A sweet family from Colombo joined our frolick at Secret Beach.

The rocks that break the waves on Secret Beach.

These are the waves around low tide…

Since Matt was heading home after Mirissa, we booked a sunset nature tour of a nearby lagoon for a last hurrah. Yes, I know, we hate nature so it was a questionable choice, but it turned out to be the kind of nature we like – prissy nature that involves cinnamon tea. The ‘Mirissa Eco Lagoon Safari’ is a quiet and intimate immersion in an ecosystem that is quickly being destroyed. The tour is a one-man operation, and the owner Upathissa has spent his whole life on the lagoon. He pointed out peacocks, mimosa plants that recoil from human touch, and glowing bioluminescent fish. When the sun went down, thousands of fruit bats swarmed overhead as the finale. The whole experience felt like felt like Alice in Wonderland, with Upathissa pointing out hidden displays of nature all around us.

The lagoon before sunset.

It was so lovely and peaceful. 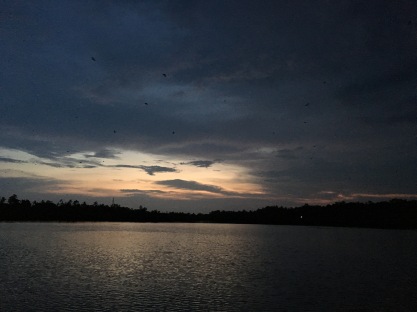 Yep, this is nature done right. Cinnamon tea for me and someone else does all the work.

The next morning, we caught a train north to Colombo. From there Matt would make the journey home and Jeff and I would head onward to Kandy – the former seat of the Sri Lankan kings.