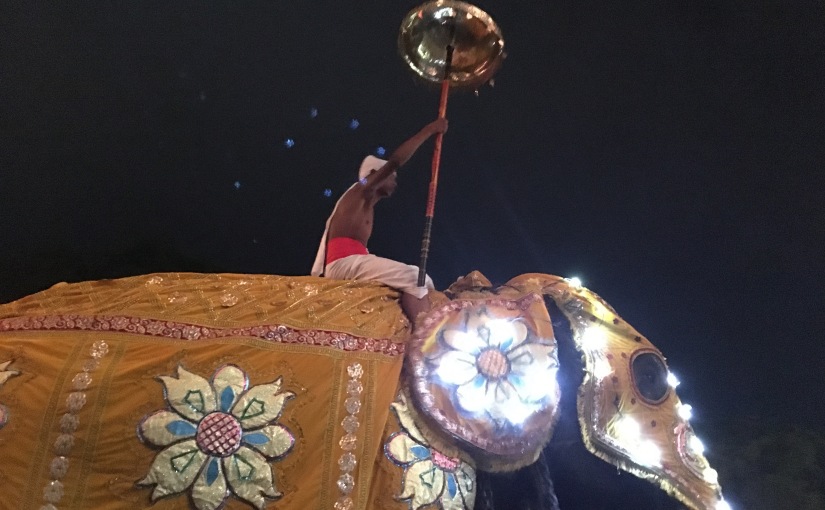 After dropping Matt off in Colombo, Jeff and I took the train inland through the mountains to the city of Kandy. Now the second largest city in Sri Lanka, Kandy was once the capital of the Kandyan Kingdom of Sri Lanka, and operated relatively autonomously until the British decided to invade it in 1815. The scenery surrounding Kandy is absolutely stunning, but Jeff and I were admittedly a little lazy and Asia-ed out so we were pretty lame in the activity department. 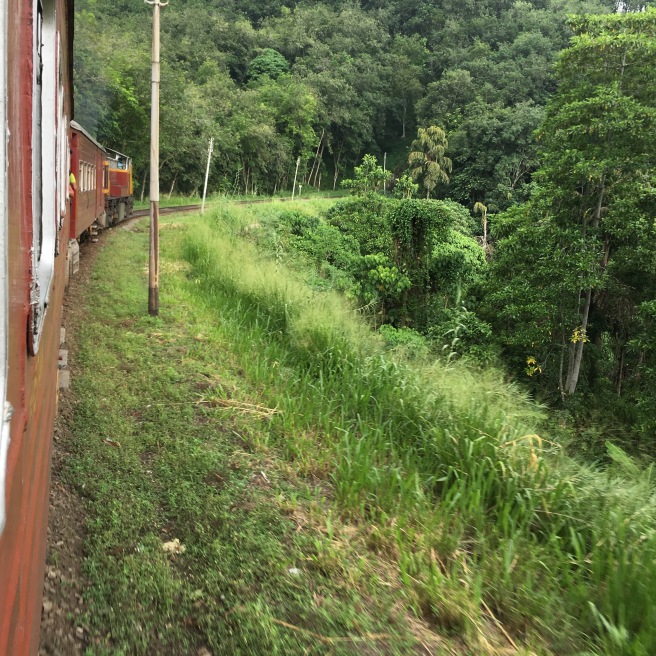 The train ride up to Kandy.

It was so much cooler in the mountains. Yay!!!

One of the buildings in the Buddha Tooth Temple complex.

The main entrance to see the Buddha’s tooth.

Our time in Kandy did hold a highlight – the Esala Perahera parade, which is usually held in August but was put on as a special treat for the visiting PM of India Narendra Modi (exclamation point exclamation point). For several days leading up to the parade we saw official looking people bustling around, and we weren’t sure what all the festivities were about. The main tourist sites in town, the Buddha’s Tooth Temple and Kiri Muhuda Lake, were completely packed with religious pilgrims and security guards. (side bar: we’ve seen an impossible number of ‘Buddha’s teeth’ in our travels. I’m honestly curious – did Buddha have a super-human number of teeth or something?)

Anyway, we had no idea this parade was happening and tried to go home early on the night of the event. As we headed home, our tuk-tuk driver insisted we get out and stay for the parade (after paying him, of course). “See the elephants!!! It starts in an hour!!!”, he told us. We grudgingly got out of the tuk-tuk and after nearly three hours of waiting in the rain the parade began. Even though I was totally irritated at waiting so long for this damn thing, it was fantastic – truly awe inspiring.

The fire jugglers. Look at that tiny one!!! I was concerned. 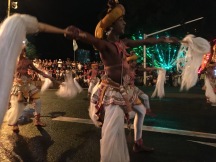 One of the dancers.

One of the 42 elephants. 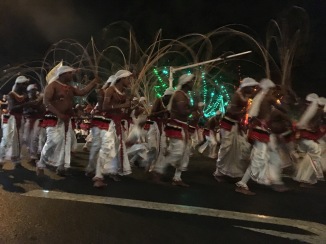 I don’t know what this is called. All of the guys held the ends of these reeds and then ran around twisting them together. 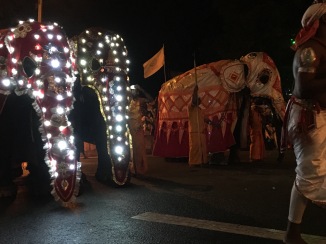 The elephants were amazing.

The parade has ancient origins but has been going in its modern incarnation since the late 1700s. The parade was ostensibly to give common people access to the Buddha tooth relic, but really it’s a fashion show of the riches of the Kandyan Empire. The procession was impressive, consisting of 42 bejeweled elephants, flame jugglers, stilt walkers, swordsmen, dancers, and entertainers of all kind. The organization and cohesiveness of the performer’s outfits, jewelry, and decorative ornaments was really impressive, and even today is a great show of power and wealth for Kandy. So fine, I guess we were kind of happy that we were good tourists and stayed out for yet another Asian festival instead of watching TV in our underpants at the hotel.

From Kandy we took the train to the airport-proximal town of Negombo to spend a day before our flight. The less said about Negombo the better. Let’s just say that we had a the worst meal of the trip (by a lot) and found the beach underwhelming. Negombo aside, Sri Lanka has been a surprising treat for us, and a great way to end the Asian Portion of our big adventure. Next up – Lebanon. And yes I know, technically this is still Asia, but you know what I mean…