After a month in India and Sri Lanka, we were ready to explore a new part of the world (i.e. we were a little done with curries and a lot done with being hot). Having visited Egypt, Syria, and Jordan in the past, we were both looking forward to exploring Lebanon. We flew from Colombo to Beirut by way of Dubai, and took quite the gerrymandered flight route to avoid Iranian, Iraqi, Syrian, and Israeli airspace. What fun the Middle East is.

Dubai from the air. Yeah, now I’ve seen the Burj Khalifa, I don’t need to go to Dubai.

The approach to Beirut. I’d love to calculate the fuel expenditure for this zigzag.

We had 10 days in Lebanon – 7 days in Beirut and 3 days in the southern city of Tyre. Lebanon is a tiny country and it is easy to traverse, so we were able to see a lot with Beirut as our home base.

We stayed in the up-and-coming hipster ‘hood of Mar Mikhael at a perfect guesthouse called Baffa House. Baffa House was built in the 1940’s by the owner’s grandfather, and has been beautifully renovated into a four-room guesthouse. The design of the place is exquisite, and all of the furnishings and artwork are from the Baffa family. Each morning the breakfast was a new treat – olives, fresh herbs, so many cheeses, and as our host Samir put it, ‘mama-made’ jams. I got some excellent design and food inspiration from the Baffas.

Samir’s aunt did a series of woodcuts inspired by the 2006 war with Israel. All of the art is really personal and beautiful. 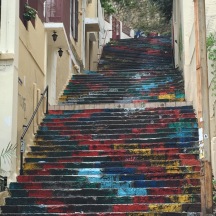 Luxurious breakfasts aside, Beirut itself is a confusing city – we were lucky to have had a full week there to process what we saw. One of the ‘fun’ things about traveling around former conflict zones is trying to figure out what people mean when they say ‘the war’. In a place like Sri Lanka, it’s fairly obvious, but in Beirut it’s complicated. Do you mean the 1975 -1990 civil war? Do you mean the 1982 siege of Beirut? Do you mean the 2006 war with Israel? To top it all off, the Lebanese constitution officially acknowledges 18 unique religious factions, and each of these factions played distinct roles in the each of the above wars. You see? It’s confusing…

This legacy of conflict has left its mark on Beirut’s urban landscape; the city’s buildings are a mixture of French colonial buildings, bombed out shells of buildings, and new (mildly garish) developments. The downtown area of Beirut is particularly perplexing. On the surface, the downtown appears to be a 4 square block area of beautifully restored historic structures. When you actually walk the streets, however, you realize that many of the buildings are vacant or minimally occupied. It feels like a ghost town, and it’s disconcerting to be the only people on the streets. Well, I take that back. There were plenty of well-armed Lebanese soldiers around, but you know, that doesn’t really help with the vibe. On one afternoon Jeff and I actually decided to go back to Baffa House because we felt so uncomfortable being the only pedestrians in downtown Beirut. 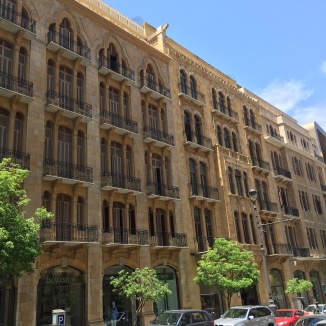 Some of the restored buildings in downtown Beirut.

The Arab states banned Coca Cola because of business with Israel. We’re firmly in Pepsi territory. 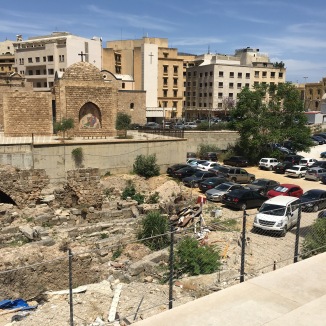 Archeological ruins in Beirut. I love that it’s being used as a parking lot.

This is the former Holiday Inn. 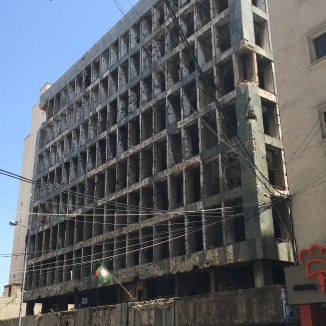 It’s not looking so good after the war.

To try to understand the urban complexities of Beirut, we did a walking tour with the lovely Rayya Haddad. Rayya is a friend of the Purwars (remember them from India?) and she’s been living in Beirut for 11 years. As we walked around Beirut’s waterfront, downtown, and the invitingly named ‘Martyr’s Square’, she helped us to better grasp the recent history of Beirut and framed the context of what we saw and felt in the city. Rayya told us that downtown had been severely damaged by bombings and snipers during the civil war, and in 1994 a Lebanese development company called Solidere won the development rights to restore Beirut’s historic downtown. Just as Beiruties were beginning to enjoy downtown again, the streets were shaken by a rash of assassinations (2005 – 2006) and a two-year Hezbollah sit-in (2006 – 2008). This firmly quenched the downtown renaissance, and now it’s a pretty but creepy stretch of empty commercial real estate. All of this turmoil has left Beirut with no real core, and the cultural epicenter of the city is always moving between various neighborhoods.

After several days of crisscrossing Beirut on foot, we did actually find a buzzing, authentic neighborhood- Bourj Hammoud. Settled by Armenian refugees after the 1915 genocide, the ‘non-partisanship’ of the neighborhood means it was relatively untouched during the civil war and is a window into Beirut as it could have been. Instead of bombed out hotels and soulless real estate developments, Bourj Hammoud is a bustling warren of jewelers, grocery stores, Armenian Christian churches, crowded restaurants, and old style Lebanese homes. It was such a treat to explore this ‘authentic’ feeling part of the city, and it highlights how tragic it is that so much of Beirut – and frankly Lebanon – has been destroyed by war.

Bourj Hammoud was filled with these cool old streets.

A famous mural of the Lebanese pop star Sabah. She is depicted without a headscarf, and that’s something.

Despite the never-ending political upheaval, a unifying theme in this country is good food. Really, really good food! To dig in deep we did a wonderful food tour with Iffat from Beirut Bites. Iffat’s motto is to take people to places they can’t find on Google, and she delivered. We ate lots of goodies, but stand out places were a hole in the wall flatbread stall, the greatest and tiniest ice cream shop ever, and an amazing falafel place called Aboulziz.

We started off with some flat breads spread with za’atar.

Then we had breads with tomato and kishk- a mixture of dried milk and bulgur. 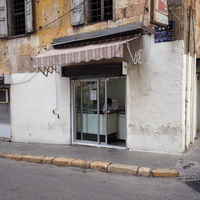 This is the store front of the best icecream ever.

Inside the shop matron was cutting strawberries for her next batch.

The assembly line for falafel sandwiches at Aboulziz. 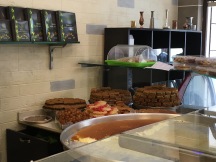 We had to come back the next day to buy more…

We also went to a GLORIOUS honey shop called L’Atelier du Miel. Run by two engineers, they have a system of moving their hives so that each batch of honey comes from a specific crop. It’s essentially single origin honey, and yes I admit that that was a ridiculous thing for me to say. I am going peak yuppie right now, and I don’t care – this honey is one of the best things I’ve ever eaten. Ever. I’m hoarding the jar I bought like it’s gold. Jeff doesn’t know it yet but he’s going to get extremely limited access to this precious honey. I’m thinking of buying a lesser quality honey and trying to pass it off to him as the same…

After a week of walking all over Beirut, we were beginning to feel like we’d scratched the surface of this place. Like I said, Beirut is complicated – but it is this complexity that makes it such a compelling city. Stay tuned for our adventures to Baalbek and Byblos!

But first, let’s do a Beirut Special Feature – Cats of Lebanon.

Every time Jeff and I see a cat on the street it’s like we’re Japanese tourists first spotting the Eiffel Tower: we freak out, take 10,000 photos, and then talk about it for hours. Every. Single. Time. 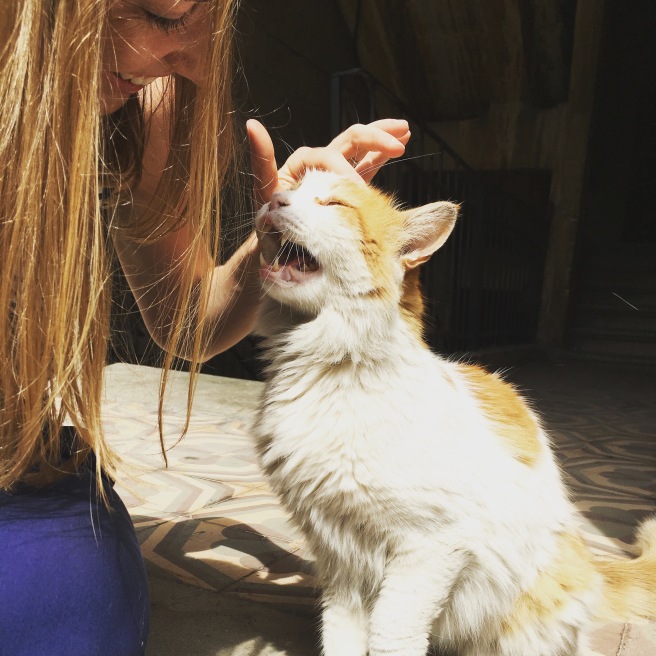 Mamoud was the most talkative of any of the cats we encountered (and possibly the prettiest). We desperately wanted to take him home with us!

Time for a lebanese coffee!

Yea, these are some pretty mean streets. See all this graffiti, yea my gang did it.

Have you heard about our lord and savior, Meowsus Christ?

This one was scampering off to catch some fish by the sea. Yum!

The. Cats. Are. Everywhere.

This guy (or gal) was one of our favorites. We found him hanging out in the back alleys of Tyre. 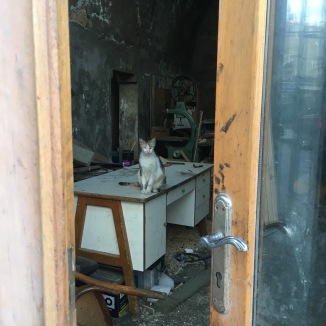 Welcome to my shop. Apologies for the clutter.

How many cats do you see in this picture? Hint: There’s more than 5.

This one was a little more timid.

Another shot of Mamoud lounging on his wonderful Lebanese tiled entry way.

Even the graffiti displays their love of Cats.