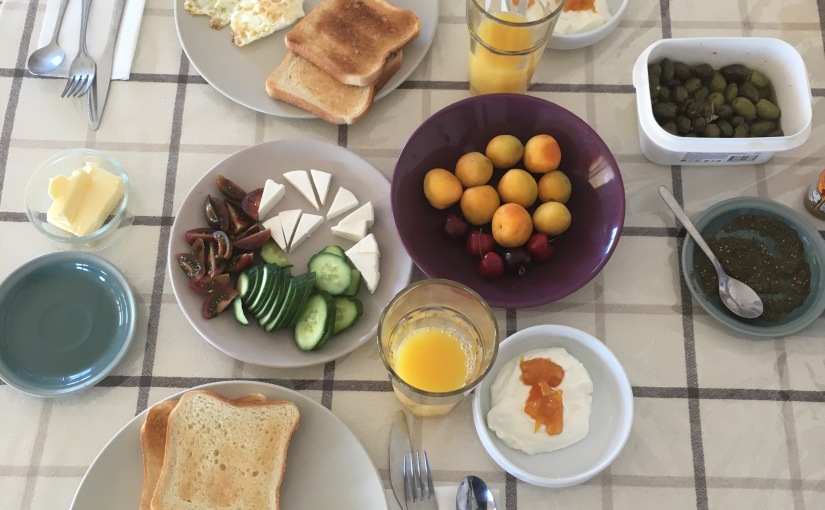 We loved Lebanon, but it was intense. Jeff has a theory that the Middle East would be peaceful if people cooled it a bit on the coffee. Perhaps a caffeine ‘sin tax’ is just the thing to spur a two-state solution? At any rate we were ready for a bit of relaxation in Cyprus after 10 days of grown man slap fights and street vendors chucking loose change at customers (but we still love you, Lebanon).

The flight from Beirut to Larnaca, Cyprus is 20 minutes so the firmly European-feel of Cyprus was striking and somewhat unexpected. We stayed in a rural area outside of the village of Kiti, and we couldn’t have asked for a more pleasant home base. Our flat had an amazing terrace that overlooked farmland on the west and the Mediterranean on the east. We spent the entire week at home looking at the sea and eating home grown olives, apricots, and eggs. Oh, and we made our first (and probably last) dog friend of the trip – and adorable mutt named Snoopy. 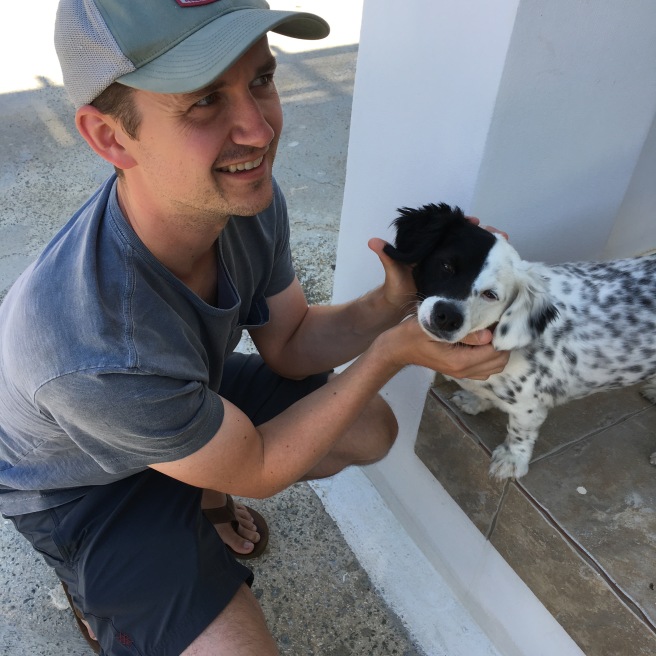 Jeff fell in love with him immediately.

And Jeff isn’t even a dog person!!!

Okay, how cute is Snoopy???

I loved him too. 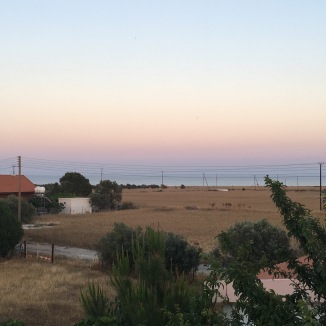 Here is our view out to the Mediterranean. 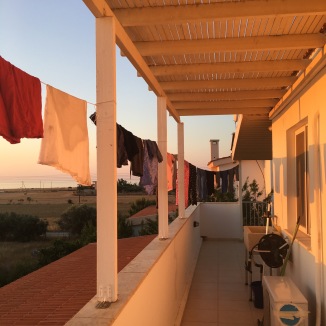 Sun rise on our terrace was so magical!

And the yogurt was amazing- I will learn how to make it.

I was obsessed with making Cypriot brekky.

Harvesting apricots with Tommy- the best AirBnb host ever.

We were remarkably lazy in Cyprus, but we did go on a few adventures around the island.

Cyprus is a large island in the Eastern Mediterranean and over the millennia it has been under the rule of Greeks, Romans, Venetians, the Crusaders, the Ottomans, and the British – so yeah, there’s some history. Not surprisingly, this history has left a blend of cultures on the island, and in the middle part of the 20th century tensions between Greek Cypriots and Turkish Cypriots spilled over into a civil war. In 1974 Turkey invaded the northern part of Cyprus and the island was divided in two, with the majority Greek Republic of Cyprus in the south and the Turkish Republic of Northern Cyprus (TRNC) in the north. The TRNC is recognized only by Turkey and remains a bit of a rogue state, so that was fun for us.

Nicosia is the capital city of both the Republic of Cyprus and the TRNC, which makes it the last divided capitol on earth. Nicosia has made a bit of a tourist attraction of being the last divided capitol on earth, and Jeff and I decided to make a day trip across the ‘Green Zone’ to spend an afternoon in Turkey. The Greek side of Nicosia was quite modern, and felt like a normal small-ish European city. As we made our way toward the border crossing at Ledra Street, however, things got a bit creepy. It doesn’t feel dangerous or anything, but you get a sense that that you’re entering an economic dead zone and many of the storefronts look like they have been abandoned since 1974.

Crossing the Greek side of the Ledra Street crossing.

Some graffiti in the UN Buffer Zone.

An arial view of the city of Nicosia. You can see the walls of the old cit and the Green Line down the middle.

The actual border crossing is very straightforward and only took about 5 minutes: a check on the Cyprus “Greek” side, walking across the barren UN buffer no-man’s land, and a check on the Turkish side. Our timing couldn’t have been more perfect – the moment we crossed over to the Turkish side we heard the call to prayer. We saw barbed wire, sand bags, bored soldiers drinking tea, and cats everywhere… Yeah, we’re back in the Middle East.

The flags of Turkey (left) and TRNC (right) flying over an Ottoman market.

Because they’re a contested state, the TRNC is trying really, really hard to be legitimate. They make a stink about accepting euros even though they know full well we tourists don’t have Turkish lira, and the Turkish and TRNC flags are everywhere. Okay, okay, I accept your legitimacy (except I really don’t). Exploring the old part of Turkish Nicosia was a treat, and we did some shopping at the Büyük Han, which was the largest caravanserai in Cyprus. The restored Han is now a tourist shopping area and gallery, and it was interesting to see a bit of Cyprus’s Ottoman legacy since the Greek side has cleanly erased these reminders.

After wandering the old streets and eating doner kebab, we took a bus from Nicosia to Kyrenia. Kyrenia is on the coast, and is described as the jewel of the TRNC, and it has a cool castle that has been used by the Romans, the Venetians, the Crusaders, and the Ottomans. There are also some ominous rah-rah Turkey statues and streets named ‘Atatürk’ and ‘Erdoğan’ just in case you forgot you’re in Turkey. 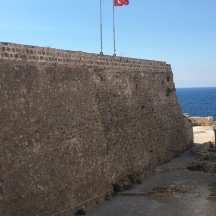 The walls of Kyrenia Castle. 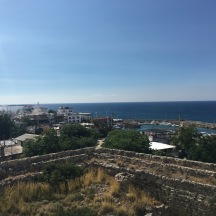 A view of the port in Kyrenia from the castle.

In addition to visiting the TRNC, we also spent a day exploring some Greek and Roman ruins in the southern city of Pafos. Legend has it that Pafos was the birthplace of Aphrodite, and today it’s a cute and easy to navigate tourist city. There are quite a few archeological sites in Pafos, and one of the more interesting ones is a site called the Tomb of the Kings. The tombs date to the 4th century BC and are carved directly into the native rock. Some of the tombs look like the ‘pigeon-house’ tombs that we saw in Tyre, Lebanon, and it’s pretty fun to get to climb all over the tombs.

A tomb in the Kings Tombs archeological site.

The entrance to one of the large tombs. 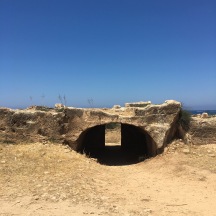 The remains of one of the less-preserved tombs.

The real treat in Pafos, however, are the mosaics housed in the main Pafos archeological park. The park contains the remains of several private homes from the Roman era, the House of Theseus and the House of Dionysus being the largest and best preserved. They have the most spectacular mosaics that I’ve ever seen, and now I’m going to get into mosaic making… It will happen. We capped off our day in Pafos by visiting a traditional taverna for a lovely lunch of meze. (side bar: it’s a good sign if the guy manning the grill is shirtless. A really good sign.)

I can’t believe how elaborate this is.

The blue on this was incredible.

I got so many fun design ideas. 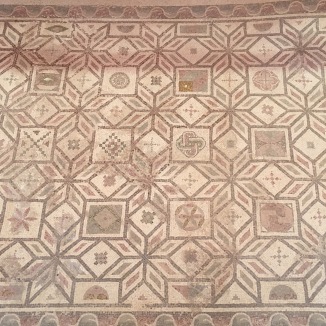 This was a mosaic ‘prototype’ made from round pebbles rather than tiles.

After our week of relaxing, eating cheese, and lazily exploring easy tourist sites, we didn’t want to leave Cyprus. It was a nice respite in our travels, and we braced ourselves for our upcoming slog through the former Soviet states…

2 thoughts on “The Magical Island of Cyprus”