Prologue: please watch this before reading to get in the mood. I hummed it for a week straight and I’ve been on a Tetris bender for the past 3 days.

Upon landing in Moscow something became immediately apparent: Jeff looks Russian. Extremely Russian. This is not the first time that said-Russianness has been brought to Jeff’s attention, but it was the most persistent. When we lived in NYC Jeff’s Uzbek repeatedly insisted Jeff was Russian. Every haircut for two years began with a Russian greeting (or threat?), confusion, then the barber demanding “You speak Russian?!?!”. Nope. In Georgia and Uzbekistan, people would speak English to me, then turn to Jeff and speak Russian. “Ruski?!?”, everyone demanded. Nope. Even when presented Jeff’s American passport, people insisted that at the very least he must understand Russian. Nope. Thus, Jeff committed to memory the following phrase: Я не говорю по-русски.. (annoying side bar: to native speakers this phrase translates to more of a “I don’t want to speak Russian”. That’s great.)

We learned something else upon landing in Russia: WE DIDN’T NEED OUR DAMN VISAS!!!! Yep, the whole Russian visa in Hong Kong debacle was entirely unnecessary. Why? It turns out that Russia was hosting the Confederations Cup Tournament, essentially a dry run for the 2018 World Cup. Buying tickets for a soccer match (which of course Jeff did) waived the visa requirements for Americans. Gah!!!! Of course we only bought our game tickets a few weeks back, but if we’d known this we could have saved a lot of hassle, money, and being yelled at.

Armed with necessary phrases and unnecessary visas, we were ready to explore Moscow. Based on nearly a month in former soviet states we were prepared for Russia to be crumbling and grim. What we found was completely contrary to our expectations: Russia is delightful!!!! This statement is strongly qualified by saying that we only visited cities and we are (obviously) white, straight, and not poor, but I was amazed at how much we enjoyed Moscow and St. Petersburg. I think that we as Americans have somewhat biased perceptions of Russia (and everywhere else) with the media mainly focusing on news stories that fit into our preconceived bias about a place. At least in the major cities the Russia we experienced is not a backward looking failed state, and we saw lots of young people creating opportunities and vibrancy. Oh, and they have olive oil!!! For the love of god I’ve missed olive oil.

The best part about our time in Moscow is that we made a Muscovite friend in Uzbekistan who kindly offered to take us around her hometown. Olga was amazingly generous with us and took us on a great walking tour of her city. We explored around the streets around Chistyye Prudy, the grandeur of Red Square and the Kremlin, the fabulous turn of the century GUM Department Store , and some amazing old style grocery stores like Yeliseev’s Food Hall. We never would have found some of this stuff on our own, and we saw a fabulous slice of ‘old Russia’. 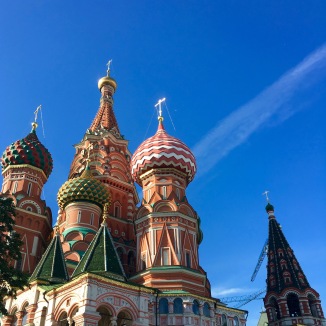 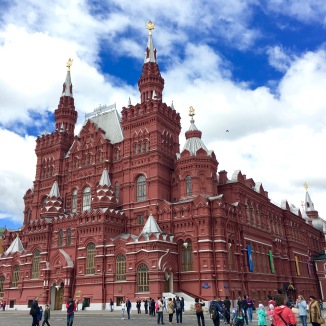 The center of Red Square. 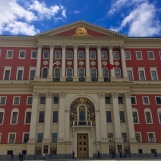 The Russian Parliament Building. I’m like 90% sure we saw Putin’s motorcade exiting… 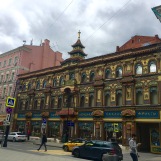 A fabulous old food hall. It was built by Chinese merchants and has such a great turn of the century vibe. 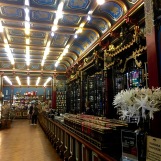 Inside they sell coffee, tea, and other goodies.

Inside Yeliseev’s Food Hall. During Soviet times this was one of the only grocery stores that remained.

The most impressive site in Moscow, however, lies underground in the extensive and stunning metro system. Are you noticing a theme in these Soviet built cities? As with the other systems we’ve seen, the Moscow Metro stations were built bomb-shelter deep and elaborately decorated, often with a theme. My personal favorite station was chemistry themed station and dedicated to the scientist Dmitri Ivanovich Mendeleev, father of the modern day periodic table. All of the light fixtures depicted atomic structures and they were incredibly beautiful – amazing. These stations were built between the 1930s and the 2000s, and it is stunning that stations built very recently were built to be beautiful. In the US, anything built after 1970 is made out of chintzy plastic and Plexiglas (BART- I’m looking at you). Say what you will about the USSR, they made some stuff happen. 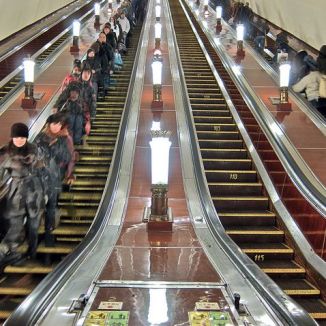 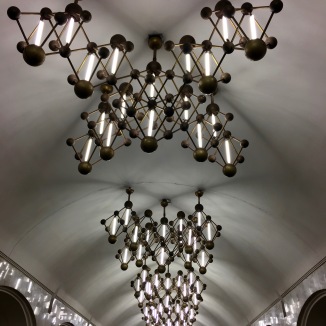 Such a sweet molecular light fixture!! 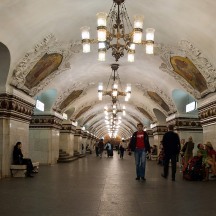 All of the architecture is so grand.

I loved these lights too. Such excellent Soviet modern details.

To top off our adventures exploring Moscow, Olga invited us for a meal at her place with her lovely daughter Lida. Getting home cooked food is always nice when we’re traveling, and Olga is an especially good cook. We had well known Russian dishes like borscht, beef, and potatoes, but it was the more obscure Russian treats that we really loved. We had some interesting brined apples (somehow pickled without vinegar), a root-beer like drink called kvass made from rye bread, and ryazhenka, a cultured baked milk. The ryazhenka basically milk with the lactose sugars carmalized – like dulce de leche minus the dulce – and of course, was my fav thing. I will figure out how to make this at home. For desert Olga made a beautiful cake and tea – we loved it all. 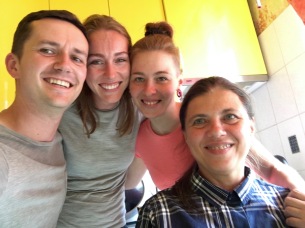 Jeff and I with Lida (middle) and Olga (right). They were so gracious to us!

All of our goodies: borschtsch, brined apples, kvass, and pirozhkis.

My baked milk delight. I’m so in love. 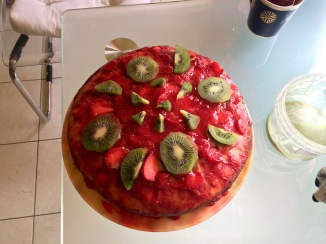 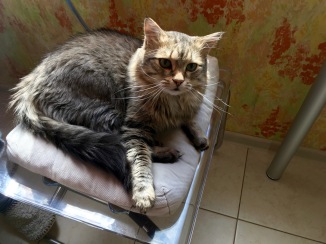 And of course, Olga’s cat. He was a big boy.

The final highlight of our exploration in Moscow was a visit to the Kremlin Izmailovo, a strange abandoned amusement park slash flea market slash kitchsy events center. This place was w-e-i-r-d. The main sight at Kremlin Izmailovo is the is the abandoned amusement park, which is particularly creepy. It seems to have had a ‘Royalty of Old’ theme, but mysteriously no rides. I guess the kids just walked around faux castles and drawbridges and that was the fun? The front of the abandoned park has now been turned into a flea market, where vendors sell all manner of fur and matryoshka dolls painted like Putin, Lenin, and dear leader Trump.

It got weirder and weirder inside. 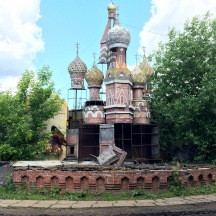 This seemed to be a stage for children’s (?) performances, but sadly it was perhaps the victim of a fire at some point.

This place could easily be the setting for a good horror movie.

All of this is less weird, however, than the kitchy ‘mini-city’ next door, which inexplicably is still in use and quite buzzing. It’s basically a fever dream of an idealized pre-Soviet Russian village, replete with a faux Russian Orthodox church, a twee restaurant called ‘Grandmas Kitchen’, a kitting shop, and something called the ‘Ministry of Joy’, which evidently performs kitschy wedding services. It’s super weird to see people clamoring over one part of the Kremlin Izmailovo complex while the other side is completely abandoned. I don’t quite understand this or how it happened…  but it was a good way to spend an afternoon. 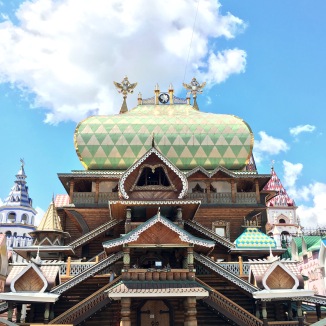 This lodge ‘thing’ seemed to be the center of the action, but I’m still not sure what it is.

As suspected, antlers made an appearance. 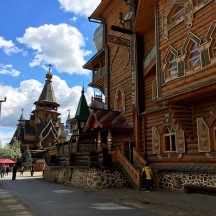 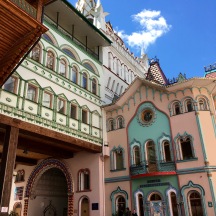 So much kitsch, everywhere! 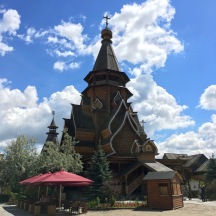 We had a great time exploring Moscow city, and were getting excited to see Russia play Portugal in the Confederations Cup. Okay, maybe just one of us was excited. I’ll let you guess who… Stay tuned for soccer and St. Petersburg.