As you may know a certain someone really likes soccer. It turns out that our time in Russia coincided with the Confederations Cup tournament – essentially a dry run for Russia’s 2018 World Cup. Surprisingly, Jeff didn’t realize this oh-so-fortuitous connection until like a week before we arrived in Russia, but once he did the internet was frantically scoured for tickets. He had great success. We saw Russia vs. Portugal in Moscow and New Zealand vs. Portugal in Saint Petersburg (or SPB, as I’m now calling it for reasons of brevity).

Since for some reason I am writing the soccer bit of this blog, this will be a short listicle. Here are some observations on the Confederations Cup:

Overall, I think that Russia is pretty well prepared for the World Cup 2018. You read so many horror stories in the US media about what an ill-planned disaster these games are going to be, but now I don’t buy it. I think that the games will be fine and now I kind of want to go (but not as much as someone else does).

My Jefferboo at the game. He’s super excited. 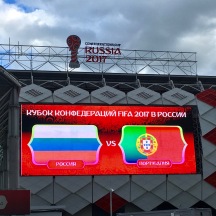 ROO-SIA-AH vs. Portugal. Oh, the excitement. 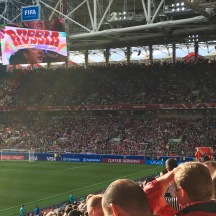 The view of the stadium. There were like 40,000 people in attendance.

I’m cold… but fighting through it.

The New Zealand vs. Portugal game.

We traveled between Moscow and Saint Petersburg by high-speed train, which took a mere 4-hours and was quite comfortable. We passed through a green and idyllic swath of the Russian countryside, full of rustic wooden picket fences and thatched-roof cottages. I’m sure that in reality most of these rural villages are very poor and grim, but seeing them whiz by on the train gave rise to (unrealistic) fantasies about spending Christmas in a wee Russian village and all the attendant cuteness of a wee Russian village. I am already planning my next Russian trip.

When we arrived in SPB I was honestly a bit surprised at how sterile the city felt. I’ve spoken to several travelers who describe SBP as magical and so much more interesting than Moscow. While SPB is definitely a lovely city, I have to say I found Moscow more enjoyable. There. I said it. SPB was founded by Peter the Great in 1703, and built by Swedish slaves captured during the Great Northern War. Because of this genesis, the city is orderly and Scandinavian. It’s lovely, but a bit… Scandinavian (i.e. super orderly and tame). To our amazement, SPB was even COLDER than Moscow. Russian summer is rough. Also, because SPB is so far north, June and July are referred to as the season of ‘White Nights’. The sun almost never sets, and it was a weird fever dream for the weather to be simultaneously cold and yet have the sun never set. Russia, you’re so weird. 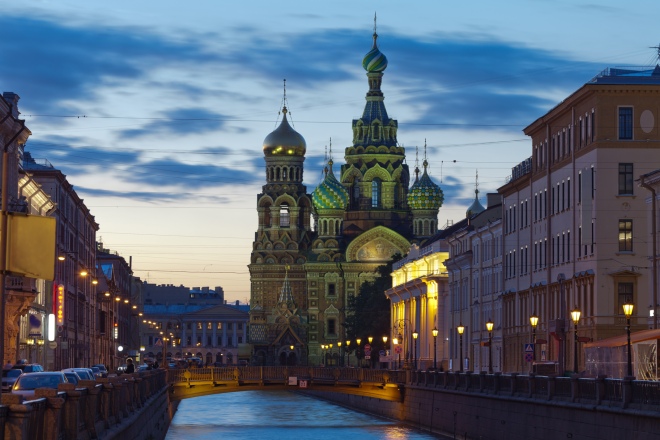 During our time in SPB we were tired of the cold and getting a bit lazy, so visiting the Hermitage museum was our main activity (other than footie watching). It turns out that visiting the Hermitage is really, really hard, so it’s a good thing that we set our activity standards low. Founded by Catherine the Great in 1754, the main museum is now housed in the impressive winter palace of Tsarist Romanov family and is one of the largest museums in the world. The building and collection are spectacular, but doing things like, say, buying tickets, involves standing in lines that test my admittedly low patience thresholds. The Chinese have arrived at the Hermitage, and the crowds and lines really make it an unpleasant experience. 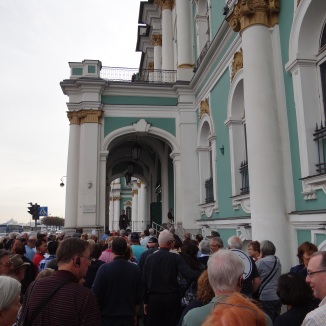 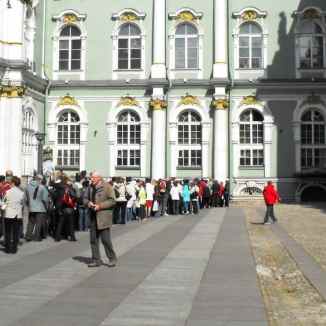 There were two things that I wanted to see at the Hermitage: the diamond room at the treasury (since lines thwarted my attempt at diamonds in Moscow) and the Bukhara room (since we were told of fabulous treasures in Uzbekistan). The former involved a 2-day process of line standing, and the latter either doesn’t exist or is so amazing that no one will tell you where it is. In any event, the diamonds were cool and the museum was crowded. That’s the Hermitage in a nutshell.

Here we are prepping for the line-stand of a lifetime at the Hermitage.

The exterior of the Winter Palace. Those lucky Romanovs…

The gruesomely named Cathedral of the Spilled Blood. The exterior of this thing is amazing.

The interior of the CoSB is pretty gaudy. Better stay outside.

Other than seeing the Hermitage, footie watching, and a weird waxing experience, the only other activity we did in SPB was visit the very interactive Museum of Soviet Arcade Machines. The museum was quite a fun way to spend a chilly afternoon, but I still can’t believe that there were no Tetris games among the collection. When I asked the museum staff, they were very dismissive of Tetris and it’s place in Soviet gaming history. WTF, Russia? You need to honor the legacy of Alexey Pajitnov and his creation of the greatest game of all time. This is definitely the worst atrocity ever committed by Russia. Just kidding… but I’m kind of not. I love Tetris.

This 1970s ‘game’ (i.e. training simulator) has a geographically accurate depiction of the Baltic Sea. I guess tiny Soviet sailors have to learn somewhere.

This is a test of strength game. You can either pull a ‘mouse’, a ‘cat’, a ‘dog’, a ‘little girl’, or a ‘granny’. I honestly can’t figure out the ranking of these categories. 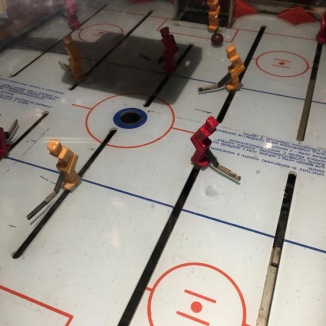 This game was freakishly hard. It was a hockey version of foosball, but since you have to deal with 3-D (not 2-D) its really damn hard.

Vintage Soviet soda machines at the museum. I got a terrifying green drink that tasted like root beer.

Tetris oppression aside, we really enjoyed Russia. It was a surprisingly great place to visit, and I hope we get to visit again. Perhaps for my unrealistically cute Russian village Christmas? Our next destination is Berlin, where we’ll meet up with Jeff’s family. Stay tuned as we briefly break through the Iron Curtain!