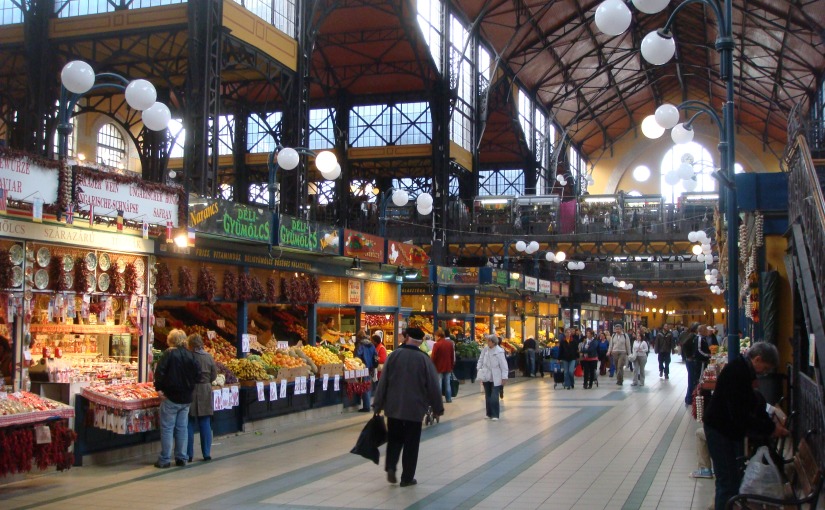 The train ride from Prague to Budapest was relatively uneventful, but getting to our AirBnb more than made up for this lack of excitement. It became immediately apparent that Budapest is significantly more Eastern European-y than what we’d gotten used to. Elderly Roma ladies blew cigarette smoke in our faces, our Airbnb host was late because the Pride Parade was under police control (really), and our attempt to secure a 3-minute taxi ride was met with a demand for 25 €. When we found a reasonably priced taxi, the driver was alarmingly frantic to get us into the car. Of course, there were 5 of humans and 15 suitcases, so this was an issue. I decided to stay behind, but as the car pulled away I realized that I was the only one who knew how to find the Airbnb. Jeff jumped out of the moving taxi and I chased it down the street to jump in. All the while the driver was screaming and the Sherlocks were terrified. Welcome to Hungary.

After the debacle was resolved and we were settled in our AirBnb, we were pleasantly surprised to learn how fabulous Budapest is. It truly is grand!!! Modern Budapest is made up of two ancient cities, Buda and Pest, which were unified in 1873 and lie on opposite banks of the Danube river. The city is simultaneously modern and charming, has a decent public transportation system, and is super cheap. Budapest attracts some tourist hoards (namely stag and hen parties from the UK), but the types of attractions are pretty diverse for such a small city. Budapest boasts a lively party scene, lots of great foodie options, beautiful historic buildings, and plenty of cultural intrigue. Both Jeff and I agree that Budapest is probably one of the best ‘tourist’ cities we’ve been to on this trip. Go visit Budapest!!!

In keeping with this theme of touristic diversity, I’ll highlight 3 top things during our time in Budapest: more Jew stuff (!!), the public baths (!!!), and IKEA (!!!!).

Unbeknownst to us our AirBnb was located in the old Jewish Quarter, and this was a big hit. Right around the corner from our apartment was the Kazinczy Street Synagogue, which was built in the 1909 and has amazing Art Nouveau flair. Budapest was booming in the 1910’s to 1920’s, and the ornate and stylized details in this synagogue capture the sense of those roaring decades. It’s sobering to think about what energy, creativity, and vision went into building the Kazinczy synagogue when you realize that Budapest’s Jewish community would be decimated a mere 25 years later. 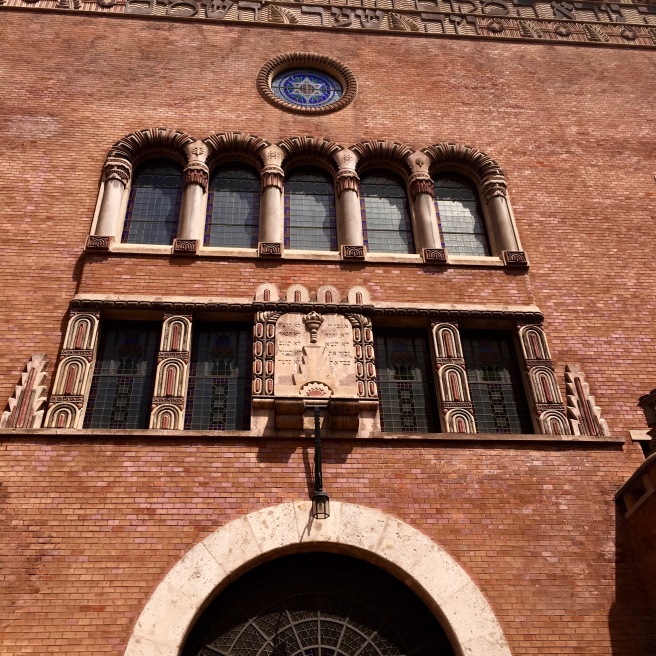 The exterior of the Kazinczy Street Synagogue. 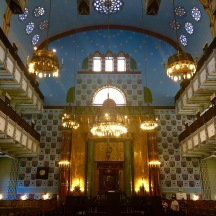 The interior is fabulous and very Art Nouveau. I think it’s my favorite synagogue of the trip. 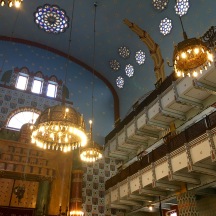 Predictably, I’m in love with the light fixtures. 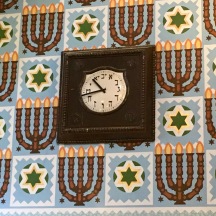 We also visited the famous Dohány Street Synagogue, or Great Synagogue, which was built between 1854 and 1859. The Great Synagogue is the largest in Europe, and is built in a very grand Moorish Revival style. Next to the Synagogue itself is a cemetery, which is unusual in Jewish tradition. It is a sad reminder of the fact that over 10,000 Jews died in the Ghetto of Pest between December 1944 and January 1945, and the synagogue became a makeshift cemetery for nearly 2,000 Jews out of necessity. The graves are part of the Raoul Wallenberg Holocaust Memorial Park within the synagogue complex, and the park is a lovely but very sad reminder of tragedies in Budapest’s not-too distant past. 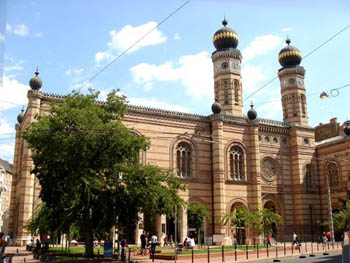 The exterior of the Dohány Street Synagogue in Budapest. 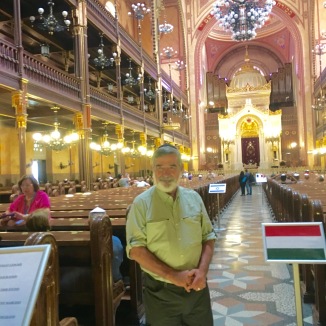 Rabbi Sherlock soaking up the sights. 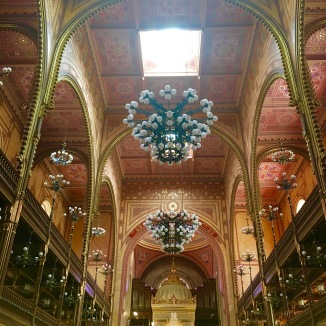 It really is an impressive building.

Not surprisingly, for me the highlight of Budapest was the baths. Having done many baths (and bath-like activities) on this trip, I can say with confidence that the baths in Budapest are something special. Unlike Turkish hamams, many (though not all) of the baths in Budapest are actually geothermal pools. Many of these pools are large enough to swim in, and magnificent structures were built to house them during the turn of the last century. The archways, intricate tile work, and stained glass skylights of these grand buildings transport you back in time (or at least to the set of a Wes Anderson movie). There are over 100 bath houses in Budapest, so it can be overwhelming to pick a bath. We settled upon the nearly 100-year old Gellert Spa for our baths (twice, actually) since they are large, beautiful, and co-ed. 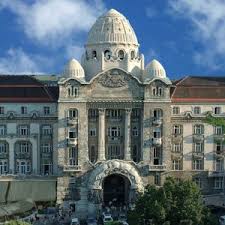 The exterior of the Gellert Hotel in Budapest. 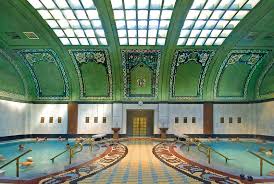 One of the main bathing areas. 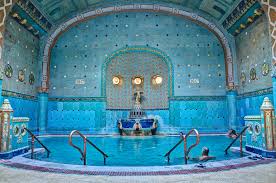 Don’t you just want to see this on a cold winters day? It would be fab. 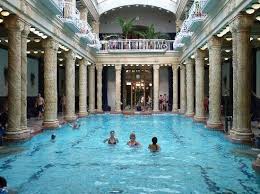 There’s also some normal pools, for stuff like water aerobics.

Unlike spas in the US where people relax in quiet solitude, Gellert Bath has a lot going on and people spend their spa days doing weird stuff like eating ham sandwiches. There is an outdoor wave pool, a lap pool, a sunbathing area, and an old school café (evidently serving ham sandwiches). We elected to spend our time luxuriating in the indoor thermal pools, steam room, and sauna, and it was an excellent use of time. There are 10 thermal pools with an unnecessary granularity in temperatures. Do we really need a 30° C bath and a 31° C bath? Apparently so. The hottest pool is 40° C (104° F) and the coldest pool is a brisk 15° C (59° F), so being a masochist I focused attentions herein. The Sherlock clan spent two fun (and eventually woozy) days jumping between the hottest and the coldest pools, then running to the sauna. I loved it so much…

A trip to IKEA isn’t most traveler’s idea of cultural immersion, but I always visit home and hardware stores when we travel. Adding to the appeal of IKEA destination, the whole Sherlock family (myself included) has a borderline-unhealthy fixation on diminutive kitchen appliances and bathroom fittings, so IKEA it was (or ‘Icky-a’, as our taxi driver Attila called it). We all have our personal passion project: Liz is really into tiny bathroom sinks, Jeff wants a super skinny refrigerator, and I’m just still depressed that IKEA discontinued my favorite sofa. It was fun (but sad) to fall in love with the different products at IKEA Budapest, and fantasize about how great our lives would be if we could just get that skinny fridge. But I guess that that is what IKEA is all about, isn’t it? Convincing yourself that your life would be so great and simple if you just lived in that tiny but immaculately beautiful 300 sq ft apartment… 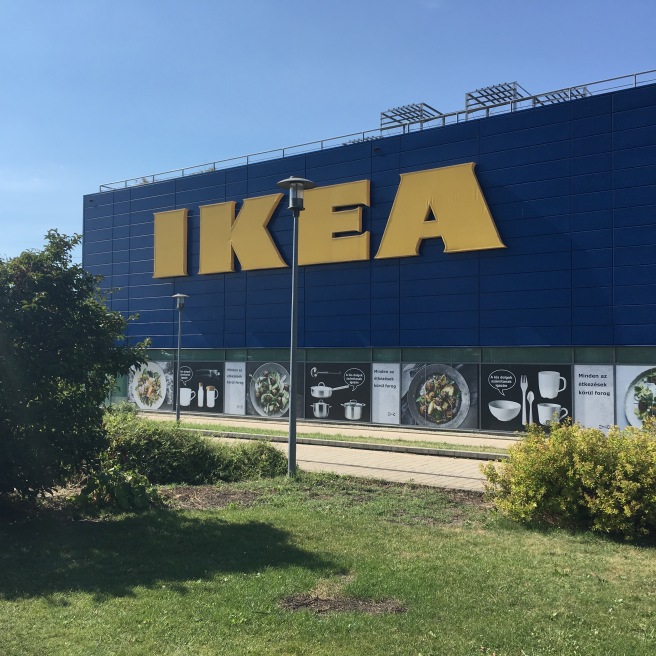 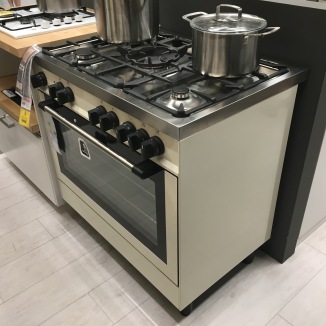 They had some pretty nice ranges. They’re a little different from the ones available at home. 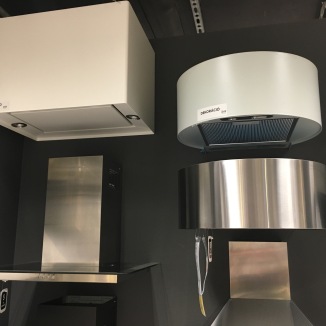 Round range hoods? Why???

After a week immersed in Budapest, it was time for the Sherlocks to go home and for Jeff and I to get aboard a 14 hour train to the heart of Transylvanian. Stay tuned for the Romanian revision…